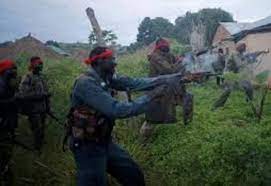 The Etsu Nupe, Alhaji Yahaya Abubakar, says ensuring the security of lives and property of Nigerians is everybody’s business and it is not negotiable.
The Etsu Nupe spoke at his palace in Bida on Wednesday, when the newly-deployed Commissioner of Police to Niger State, Mr Monday Bala-Kuryas, paid him a courtesy call.
Abubakar, who is also the Chairman, Niger State Council of Tradional Rulers, added that the Police and other security agencies require the support of the citizens.
This support, Alhaji Abubakar stated, is required to enable the agencies to diligently combat the myriad of security challenges facing the country.
He lauded the security agencies for doing their best in the face of the acute paucity of manpower, logistics and equipment .
The traditional ruler said that the District and Village Heads in the Emirate are forging sustainable synergies with security agencies.
“They are routinely passing credible intelligence information which is also being sent to the appropriate authorities .
“The right actions are always taken and most of the crimes are nipped in the bud.
“I am assuring that this level of support would be sustained,” saying that without peace and security, the nation cannot develop.”
Speaking earlier, Bala-Kuryas urged the people of the state to continue giving useful information without bias to the police, to sustain the fight against crimes and criminality.
He commended the Etsu Nupe for the relative peace being enjoyed in his domain, saying that he emirate is the most peaceful in the state.
“I promise to make the Emirate more peaceful than I met it while I call for cooperation of all and sundry, including traditional institutions, to fight crimes and criminality.
“The police will not underscore the role of traditional institutions in complementing the effort of security operatives in checkmating criminal activities.
“The role of traditional institutions in sustaining peace and unity in the country is very important and we are not going to relent in partnering with them,” he said.