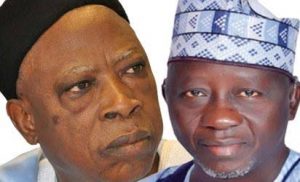 ***Plot To Retire Adamu, Almakura, Sule From Scene
***They are political neophytes, we are in control-Sule

Nasarawa State promises to be the melting pot against the 2023 elections, with reports of gang up to upstage the apple cart against the trio of Senator Abdullahi Adamu, National Chairman of the ruling All Progressives Congress, APC, Senator Tanko Almakura; immediate past Governor of the State and Governor Abdullahi Sule, by disgruntled members of the APC and opposition politicians.
Reports from the state indicate that, top politicians across political parties and some APC members, who were disatisfied with the outcome of the last party primaries have vowed to retire the trio from politics by mobilizing against their choice candidates in the forthcoming elections.
National Trail investigations reveal that, the crisis rocking the APC in Nasarawa State following the failure if the leadership to resolve issues arising from the last primary elections, may not be unconnected with the said plot, in which Honorable Aliyu Wadada, Hon. Joseph Haruna Kigbu, Jonathan Gbeffi Gaza, and Hon. Mohammed Sarki Dahiru, all of the APC,were denied tickets for the various positions they sought.
According to sources close to the meeting of the APC disgruntled aspirants, who have been networking with opposition politicia s in the state, the move is gaining momentum.
While those who were shortchanged have vowed to take their pounds of flesh in the forthcoming elections, opposition politicians are making inroads into the crisis ridden APC, and may reap from the fallouts if the crisis.
This is even as some of them have already defected to other political parties, while the others who chose to remain in the APC and will fight from within.
Our correspondent reports that, though Senator Adamu has been at daggers drawn with Almakura and Governor Sule, in the build up to the National convention of the APC, which produced Adamu as the National Chairman, they have since resolved their differences and worked hands in glove during the last party primaries: many described as heavily flawed.
Those who lost out in the primaries have already approached the courts to reverse the exercise, which they claimed saw to the alleged imposition of candidates and shortchanging more popular aspirants.
According to them, they have received several threats of sanctions against them by the party leadership, citing sections if the APC constitution, but they stuck to their guns.
According to those who lost out during the primaries, the list of delegates during the exercise was altered, to favour preferred candidates if the trio of Adamu, Almakura and Sule.
They said exercise, the arrangement was meant to compensate Tanko Almakura who lost out to Abdullahi Adamu, in the National Chairmanship contest.
The primaries went ahead in the face of protests, to produce Tanko Almakura unopposed for the Nasarawa South Senatorial district and his nephew, Mohammed Almakura as candidate of the APC for Lafia/Obi Federal Constituency for the House of Representatives.
As it is, Aliyu Wadada, who narrowly lost out to Governor Abdullahi Sule in 2019, and who was widely favoured to win the Nasarawa West Senatorial seat of the APC for 2923, has crossed over to the Social Democratic Party, SDP, as it’s Senatorial candidate for the Nasarawa West Senatorial District, while the Senator Representing Nasarawa North, Godiya Akwashiki, has moved over to the Action Alliance.
Other notable APC members who have dumped the party, with a view to teach Adamu, Almakura and Sule political lessons include, Hon. Jonathan Gbeffi Gaza, who is representing Karu/Kona/Gitata Federal Constituency and Abubakar Saki Haruna if Lafia/Obi Federal Constituency.
These developments are coming on the heels of overtures to these powerful politicians by the opposition Peoples Democratic Party, PDP, which promises them fair treatment and opportunities to actualized their ambitions.
Reports indicate that, the Governorship candidate of the party, David Ombugadu and Chairman, Francis Orogu have been reaching out to the disgruntled APC members with a view to firming a common front against the state Governor, Abdullahi Sule.
Sources confirmed that, the Presidential standard bearer of the PDP, Atiku Abubakar has agreed to meet with all the defectors, promising them better deal in the PDP.
This is even as a close associate of Governor Abdullahi Sule, who does not want to be named has dismissed the plot as infantile and laughfable, describing the brain behind it as political neophytes.
“We don’t see the coming together of all those who lost out during the primaries as a threat to the APC. We are deeply rooted and in firm control, so they are just joking”, he added.
He said Wadada, Akwashiki, Gaza and the others are bad losers and may never come to reckoning in Nasarawa politics, after they fail in 2023.
Our correspondent reports that, even with the Governor’s grandstanding, uneasy calm pervades the political climate in Nasarawa State.