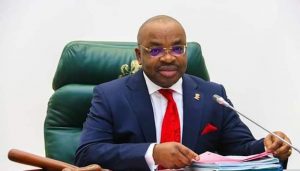 The handpicking of Pastor Umo Eno, Commissioner for Land and Water Resources of Akwa Ibom by the state governor, Udom Emmanuel, has been described as highly undemocratic and violates the right of the citizens to elect the leader of their choice through the ballots.
Recall that Governor Emmanuel had on Sunday in a stakeholders’ meeting, named Umo Eno as his preferred successor ahead of the 2023 general elections, but this did not go down well with most of the aspirants under the Peoples Democratic Party (PDP) as well as some citizens of the state who said the governor does not reserve an exclusive right to determine who governors the state.
Apart from member House of Representatives, Honourable Onofiok Luke, who has dissociated himself from the decision, and has told his supporters to disregard it, other prominent PDP member from Akwa Ibom State have added their voices and called on the people, especially members of the political party to stand their ground against the anti-democratic action of the governor. They said the governor is bent on destroying the party that made him governor for two terms.
According to Iniobong Bassey, a chieftain of the PDP in Akwa Ibom, “It is unfortunate that Governor Udom Emmanuel whom I have great respect for could descend into such uncharitable act. Akwa Ibom is for every one of us, it does not belong to Emmanuel. Every interested person must be given the opportunity to test his popularity. Presenting an individual to the stakeholders as his successor is highly undemocratic.
“Emmanuel has forgotten what he did to Senator Godswill Akpabio who was instrumental to his enthronement, today, both of them are worst of enemies. If Emmanuel makes Eno the governor, I am sure he too must have a fair taste of embracement when ‘jungle will mature’. Who could believe that Emmanuel could disrespect Akpabio just within the space of three years? Emmanuel should expect his own turn, because whatever a man sows, that he will reap”.
On her part, another PDP member from the state, Emem Johnson, has called on members of her party, especially those that will serve as delegate to save Akwa Ibom from politics of imposition of candidate. “How can we be talking about improving our democracy and someone is hand-picking an individual? This means the governor is not interested in enhancing our democracy, which is a government of the people, for the people, and by the people; according the great American leader, Abraham Lincoln.
“I advise every aspirant to go ahead with his/her quest for the leadership of Akwa Ibom. They should not be perturbed by this sudden development, which will not do our party any good. It is obvious that Emmanuel wants to replicate what former governor of Bayelsa, Seriake Dickson who imposed a candidate just for his selfish ambition to go to the senate, and PDP lost to opposition APC. If not for the court that overturned the victory of David Lyon, PDP would have been out of power in Bayelsa.
“I am afraid this is the same trend that is playing out in Akwa Ibom. Our state has been a PDP state, no doubt, so we will disappoint him. The best candidate should emerge through the will of the people, and not by the whims and caprices of an individual. Whether he said it was God that spoke to him or he only wanted to use God’s name just authenticate his claim, I believe that God is not an author of confusion, and should not be dragged into such”, Emem Johnson averred.