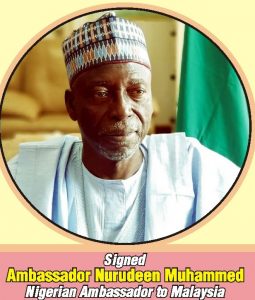 Nigerian Ambassador to Malaysia, Ambassador Nurudeen Muhammed, Tafidan Kaiama, has expressed his sadness at the demise of the first Lawyer from the Northern Region and patriarch of the AbdulRazaq family, Alhaji AbdulGaniyu Folorunsho Abdul-Razaq (SAN) who died in the early hours of Saturday.

Ambassador Muhammed in a statement personally issued to commiserate with the AbdulRazaq family, the Emir of Ilorin, Alhaji Ibrahim Sulu Gambari and the people of Ilorin Emirate on the death of the Mutawali of Ilorin, said the deceased lived a fulfilled life.

The Nigerian envoy, who extolled the contributions and virtues of the late legal ICON to the development of Ilorin Emirate, Kwara State and Nigeria as a whole, especially with the establishment of a reputable institution in Ilorin, the state capital, now known as Government High School, stressed the need to immortalise the late first lawyer in Northern Region by renaming the school or any monumental place after him.

Ambassador Muhammed condoled with Governor AbdulRahman AbdulRaszaq on the death of his father, saying that the deceased left a huge legacy behind, especially with his son becoming the Governor of Kwara State when he was alive.

The envoy therefore prayed for the repose of late AGF AbdulRazaq and also prayed Allah to give the family the fortitude to bear the irreparable loss.