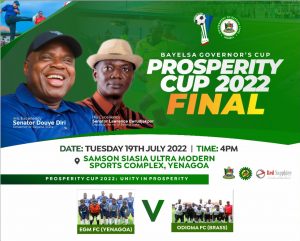 The crème de la crème of Nigeria football will converge on Yenagoa the Bayelsa State capital for the grand finale of Nigeria’s biggest grassroots tournament the Bayelsa State Governor’s Cup tagged “Prosperity Cup” after months of football activities across 20 centres in the eight local government areas of the State.

In a statement by Director General of the Prosperity Cup Mr Ono Akpe, Governor Douye Diri would take the ceremonial kick-off supported by the Deputy Governor Senator Lawrence Ewhrudjakpo, Speaker of the the State House of Assembly Rt Hon. Abraham Igonbere, the Commissioner of Sports, Hon Daniel Igali amongst other dignitaries.

Also expected to grace the occasion are members of the Bayelsa State House of Assembly and state executive council, party leaders, political appointees,
football legends in the country and other dignitaries who would be part of the closing ceremony of the historic tournament that featured 206 community based teams.

Mr Akpe explained that the losers final between Anyama FC of Ogbia and Agbere FC of Sagbama will open the floodgate of excitement by 1pm at the Samson Siasia Stadium with other side attractions before the final.

According to him, preparations are in top gear towards having an exciting final and urged youths of the state to continue to channel their energies to sports and other positive things that will lift the ratings of the state.

Mr Akpe equally thanked Governor Douye Diri for supporting the Tournament including hosting of 2 sets of foreign scouts which according to him has raised the hopes of young Bayelsans who are positive on playing football internationally and being featured in the various state and national teams soon.