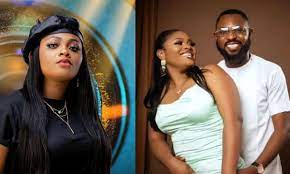 The reality star, who took to her Instagram page to frown at the decision of some women who refused to leave
their abusive marriages, said that they deserved what they got.

According to her, some women decide to stay in abusive marriages, thinking that the man will change or they want to remain Mrs somebody.

Dominic added that those women that decided to stay, with the hope that the man would change or remain Mrs somebody, deserved what they got, which was not far from “mental or physical death.”

“Most women go through worst things all because they want to answer MRS tag or he will change, lol, the end of it is death, physically or mentally.

“Just so you know, revival after mental death is worse than actual dying, we women no dey hear word.

“Next they will say our mothers that stayed nkor? Have you asked your mother how she is feeling deep down?Bloody Narcissist.

Sometimes, I always think some women deserve what they get because them ”no gree get sense”.

“Na to drive Benz and Lexus dey hungry you, Just so you know, if you die, na mechanic go first drive am before they give it out,” she wrote.

Dominic was a contestant in a reality television show, she was evicted from season 6 show on Sept. 5, 2021 at a live eviction show.

She left the House as the ninth Housemate, after Yerins, Niyi, Beatrice, Arin, Princess, Sammie, JMK and Maria.