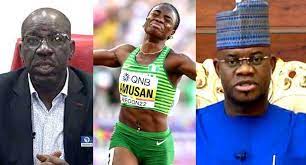 Gov. Godwin Obaseki of Edo and Chief Mike Oghiadomhe, Chief of Staff to ex-President Goodluck Jonathan, have joined other prominent Nigerians to congratulate Sen. Yisa Braimoh on his 80th birthday.

Obaseki in a statement in Abuja, commended Braimoh for his remarkable contributions to the development of Edo, as well as the unity and progress of the country.

“I extend hearty congratulations to Sen. Yisa Braimoh, the Osiozoikhai of Auchi Kingdom, a nation builder and an elder statesman of our great party, the Peoples Democratic Party (PDP).

“You have made remarkable contributions to the development of Edo, even as you continue to work for the unity and progress of our nation,” he said.

The governor described the former lawmaker as “passionate and diligent leader who championed worthy causes across administrative, business and legislative spheres in Nigeria.”

He said the senator, who represented Edo North Senatorial District at the 6th National Assembly, recorded prodigious achievements, successfully carved a niche for himself and improved the lives of his constituents and others who had come to know him.

“You gave a good account of yourself when you served as Senator for Edo North Senatorial District, and have remained a promoter of justice and equity.

“As you join the octogenarian league, I celebrate you and pray that the Almighty grants you many more years in strength and in good health,” Obaseki said

Also, a former Chief of Staff to former president Goodluck Jonathan, Chief Mike Oghiadomhe, who was the chairman at the event to celebrate the senator in Abuja, congratulated him on his 80th birthday.

Sen. Briamoh, supported by his wife, children and other family members, in his speech, thanked God for lifting him from a very humble background to an enviable position in life.

According to him, the experiences of my very humble beginning in life instigated my motivation later in life to relentlessly contribute my God-ordained quota to charity and the less-privileged.

“If it pleased Almighty Allah to keep me and raise me to this level of my life, the least I can do in reciprocation is to give back to society through the channel of philanthropy,” he said.

He said he believed in the philosophy that says: “The greatness of a man is not measured by the amount of wealth he acquires but by the number of lives he is able to touch or impact upon positively.”

He said over the years, he had contributed to the building of mosques, schools and public-spirited works and infrastructure that had enhanced living standards and conditions of the society, especially the less-privileged.

“Over the years, my scholarship foundation has become a bridge through which many indigent pupils and students within my community in Edo North senatorial district and beyond have acquired basic and higher education and attained great heights themselves, ” he said.
The former legislator, who was born on Aug. 12,1942 in Edo, also marked the occasion with a comprehensive Muslim prayers both at his Asokoro residence and the Halal Children’s Orphanage Home, Abuja, on Friday where he donated food items and cash to the students of the home, including scholarship offer.