The Bureau of Statistics, a Federal Government Agency has been accused of misleading Nigerians with figures of Nigeria’s unemployment rates as well as the level of intellectual migration out if the country.

Youth coordinator of the Tinubu/Shettima campaign organization and Governor of Kogi state, Yahaya Bello said on live Arise TV morning Show on Wednesday, that the statistics being churned out by the agency are not true.
He was responding to questions on what the Tinubu/Shettima administration plans to do differently about the current situation of things in Nigeria.

According to Bello, the modalities adopted by the Bureau of Statistics to arrive at the figures of Nigeria’s unemployment rate, as well as the statistics on brain drain in the health sector were not only unreliable but unacceptable to the Government.

He said the APC Government has always been suspicious of the bureau for certain acts that have tended to sabotage Government plans for Nigerians.

While accusing some critics of relying on false statistics to judge the Government, Bello said the APC is doing well and Tinubu and Shettima will build upon what President Buhari has done; not minding the criticisms.
The campaign Youth Coordinator accused some Nigerian elites of conspiring to demarket the APC, in the face of concerted efforts being made to uplift the lives of Nigerians. 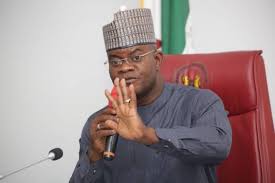 Yahaya Bello was of the view that, a lot of falsehood is being churned out against the administration of Muhammadu Buhari.
While admitting that there are challenges, Governor Yahaya Bello said the APC performed far much better than the People’s Democratic Party, PDP, and the APC which faced even greater challenges is in a better position to rescue Nigerians from the present quagmire.
He maintained that Peter Obi, the Presidential standard bearer of the Labour Party, LP was over rated in the latest ranking which placed him ahead of Bola Ahmed Tinubu.
He said, Bola Ahmed Tinubu is the party to beat in the forthcoming elections.

The Nigerian Guild of Editors (NGE and the Socio-Economic Rights and Accountability Project (SERAP) have instituted a joint lawsuit against President Muhammadu Buhari and...
Read more

Tears As 26 Traders Perish In Boat Mishap In Borno

***Eight bodies Recovered, Eighteen Still Missing. By: Ali Musa Biu-Maiduguri 26 people, mostly traders, are feared to have been killed in a boat accident on the...
Read more
- Advertisement -