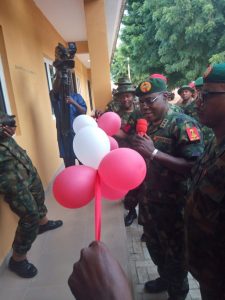 Lt. Gen. Faruk Yahaya, the Chief of Army Staff (COAS), on Wednesday, in Sokoto, inaugurated 20 blocks of houses, consisting of 12 flats each of one bedroom apartments at Giginya barrack.
At the inauguration, Yahaya reiterated the Army’s commitment to providing improved accommodation for soldiers, as part of the leadership’s vision of ensuring soldiers’ welfare for enhanced performance.
He commended the vision and courage of previous leaderships of the Army, assuring that the efforts would be sustained, and urged the soldiers to live up to expectations in discharging their duties.
Earlier, Maj. Gen. Uwem Bassey, General Officer Commanding, 8 Division, commended the COAS for the efforts and consideration of soldiers’ welfare.
Bassey, also the Force Commander, Operation Hadarin Daji, assured that the infrastructure would be maintained and safeguarded.
The News Agency of Nigeria (NAN) reports that Yahaya had earlier inaugurated the second Army Corps of Education summit under the theme: ” Education development and national security: Issues and way forward ”.
Meanwhile, families of soldiers and community members were among those that attended the inauguration of the houses.