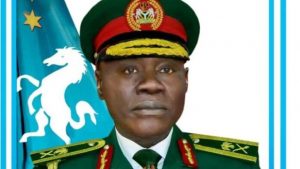 The Chief of Army Staff (COAS), Lt.-Gen. Faruk Yahaya, says he is committed to restoring, developing, and improving the confidence, skills and competence of soldiers progressively in their careers.
Yahaya stated this at the opening of the Combined Second and Third Quarter Chief of Army Staff Conference on Monday, in Abuja.
He urged the Nigerian army training department and institutions to develop additional leadership training modules, courses and curriculum to enhance the career of the individual soldier.
He said that the aim was to enable the soldier conduct his activities more effectively, assert his command and leadership role as Non-Commissioned Officer, Senior Non-Commissioned Officer and Warrant Officer.
“We need similar additional leadership development Modules and Courses for our young officers to enable them to grow as competent, effective leaders and commanders.
“We can explore officers and soldiers’ leadership training modules from other countries even though we should be alert and to domesticate them to best suit our needs, and our environment,” he said.
The COAS said that sound administration of troops was essential to operational effectiveness and high morale, saying that troops’ welfare and that of their families would be given paramount attention.
According to him, welfare is not only limited to monetary incentives or promotion, but it also includes effective and realistic training which would save the troops’ lives and avert injuries.
“Welfare includes genuine concerns for the troop’s well-being, care, and maintenance of their facilities and amenities, easing their challenges and hardship, sharing in their pains and joys.
“Welfare as part of effective training would include guiding and mentoring of subordinates, appreciating their strength and weaknesses, and being firm and fair to them in all circumstances,” he added.
Yahaya said was committed to rebuilding the Nigerian army into a formidable force through his vision of having “a Professional Nigerian Army Ready to Accomplish Assigned Missions within a Joint Environment in Defence of Nigeria”.
He said that his vision would drive his command philosophy which includes Professionalism Readiness, Administration and Cooperation as the cardinal pillars.
The army chief commended the officers and soldiers for their unrelenting sacrifice and efforts in ensuring that the Nigerian army fulfilled its constitutional responsibilities.
“I will continue to demand that you redouble your efforts so that we can decisively deal with our adversaries or any group or person that threatens the peace and stability of our great nation.
“In so doing, we will achieve our end state of ensuring a peaceful and stable Nigeria.
“I will also be using this conference to give very clear directives of what I expect from all of you,” he said.
Retired Maj.-Gen. Lawrence Ngubane, who delivered a lecture titled, “Leadership Development a Panacea for Accomplishing Mission in a Joint Environment”, said there was a need to build capabilities of officers and soldiers.
Ngubane said that officers’ careers must be designed to continually develop, refine and exercise special skills often especially among senior ranks.
He said strategic leadership development for armed forces would require a new trajectory for professional military education that must include associated career management systems.
He said that officers must be adequately prepared to address current and future security challenges through strategic leadership capacity development.
Ngubane added that the demand for the present security environment was significant.
Our correspondent reports that the COAS inaugurated seven Satellite Communications Vehicles to aid the ongoing operations against terrorist bandits and other criminality across the country.
The mobile communication equipment was constructed by the Nigerian Army Cyber Warfare Command (NACWC) for the theatres of operation.

The Acting Commander, NACWC, Brig.-Gen. Abubakar Adamu, while briefing the COAS, said the vehicles were designed with the capability to provide adequate information to troops on the battlefields.
He said that the equipment also had the capacity to share information among neighbouring theatres of operation for easy coordination of operations.