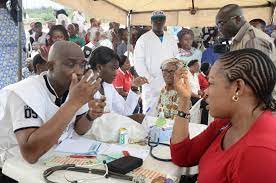 The National Commission for Refugees, Migrants and Internally Displaced Persons (NCFRMI) on Friday took a medical outreach to persons of concern at Waru IDPs camp as part of its social responsibility.

The Federal Commissioner, NCFRMI, Hajia Imaan Sulaiman-Ibrahim, at the event on Friday said the commission targeted no fewer than 275 persons of concern to benefit from the programme.

Sulaiman-Ibrahim said that the idea was to ensure total health inclusion of the persons of concern in the country.

“I’m so excited about the new medical insurance bill that made it mandatory for free medical care for the vulnerable and this includes persons of concern.

“So, once that becomes publicly implemented and the trust fund activated, we will make the right assessment ready to deploy and migrate persons of concern to the National Health Scheme.”

According to her, health is wealth, life and everything, hence the need for the inclusion of everyone when it comes to affordability and accessibility of healthcare.

She said the exercise, which is called ‘Total Health’ and a pilot phase would be extended to other states with time.

“We check every aspect of their health, the eyes and the general health and also through this we will be able to strengthen the health facilities in the host communities.”

The commissioner also advised the beneficiaries to utilize the opportunity for their total health being, while encouraging them to invite others to participate in the exercise to maximize value.

She, therefore, appreciated the medical team for their service to humanity.

Prof. Kabir Oladigbolu, an Ophthalmologist at ABU Teaching Hospital, Zaria said that the exercise would help to address the health issues of IDPs in the country.

Oladigbolu said that the one-week programme was set to bring relief to people who had been displaced from their original homes due to insurgency and terrorism.

“We are here to examine their eyes, vision, eye pressures and those that require glasses will be given as well as treatments,” he said.

According to him, surgery will equally be carried out for who require minor surgery on their eyes and all are free.

Dr Abdullahi Kazaure, a General Physician at Maitama District Hospital said that the programme was in line with the Sustainable Development Goals to include all peoples of venerability into free healthcare scheme by year 2030.

Kazaure commended the commissioner for creating the opportunity for persons of concern to have free health care.