F.G Should Name a Street In Honour of Prof. Akin Mabogunje – Ono Akpe 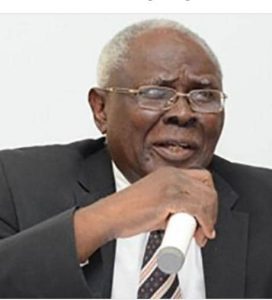 Abuja’s foremost PR and Events Management Consultant and Coordinator of ” _Rise for Bayelsa Environmental Project”_, Ono Akpe, has called on the Federal Government to name a street in honour of Nigeria’s first Professor of Geography, Prof. Akin Mabogunje stating that his works placed Nigeria on a global limelight.

Recall that Akin Mabogunje, the first professor of geography in Nigeria passed away on Thursday morning at the age of 90.

In a release signed by Akpe, joined other Nigerians to mourn the demise of the great pprofessor of and father of Urban and Regional planning whom on his 90th birthday in 2021, President Buhari noted that professor’s publication titled ‘Urbanisation of Nigeria’, has guided the activities of the national census board and the federal capital development authority.

According to Ono Akpe, during the celebration of Profs 75th Birthday in 2006 which his organisation, Red Sapphire was privileged to coordinate, Prof was extolled far and wide the shores of Nigeria and beyond as a great intellectual an erudite principle scholar.

Akpe described Prof Akin Mabogunje as a humble and visionary leader with the highest level of integrity, very accommodating despite his international exposure.

Born on October 18, 1931, in Kano, the professor attended Mapo Central School for one year and left for Ibadan Grammar School after passing its entrance exam.

Mabogunje, who was regarded as the father of African geography, was the first African president of the International Geographical Union, a position he held from 1980 to 1984. In 1999, he was the first African to be elected as a foreign associate of the United States National Academy of Sciences.

He has received several awards including the Vautrin-Lud Prize which he won in 2017, becoming its first African recipient. The prize is the highest honour in the field of geography.

Mabogunje wrote Urbanization in Nigeria, about urbanization and state formation. In the book, Mabogunje argued that the existence of specialists is not sufficient to cause urbanization. Mabogunje described three “limiting conditions” which are additionally required: a surplus of food production, a small group of powerful people to control the surplus and maintain peace, and a class of traders or merchants who can provide materials to the specialists.

Prof Mabogunje’s works goes beyond the confines of urban and regional developement to encompass regional development, environment and population amongst others, thus bringing about the launch of his organisation, the Foundation for Development and Environment Initiatives which we were proud to have worked with him to launch in 2006 at the International Confernce Centre Abuja. FDI was established by him specifically to address problems of urban and environmental development at both the national and international levels Mr Akpe stated.

” He was a founding Father of Abuja, and left great legacies and impactful works in so many other areas. He was a great son of Africa and a great blessing to Nigeria”

‘’Clearly, Prof Akin Mabogunje deserves even a layout not just a street named after him by the Federal Government’’ he added.

The Federal and Cross River State Governments have expressed satisfaction with the investment of the Coronavirus (COVID-19) grants in...
Read more
Entertainment

Ganon Baker, an international high-performer basketball trainer has called for more technical basketball academies in Nigeria to raise the standard of the game. Baker made...
Read more
- Advertisement -