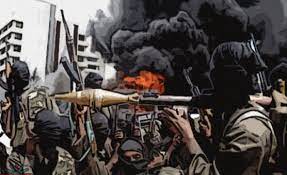 President Muhammadu Buhari has been called upon to as a matter of urgency proclaim a State of emergency in Nigeria following  his obvious inability to steer the affairs of the country.
A chieftain if the Social Democratic Party, SDP, Ben Adaji who recently decamped  from APC to the social Democratic party SDP addressed a Press conference in Jalingo on Thursday saying that the continued spate of insecurity, the destruction of the economy and polarization of the country has shown clearly that the President lacks the capacity to lead the country and should step aside and invoke section 305 sub-section (1) of  the Nigeria constitution by declaring a state of emergency in the country.
He urged the president to dissolve the National Assembly and Federal Executive Council forthwith with a proclamation of a state of emergency in the country.
Adaji, who is also a veteran journalist and a House of Representatives candidate for Ankpa,Olamaboro and Omala Federal constituency in Kogi State lamented that President Buhari should not wait until the entire country is overrun by bandits before declaring the state of emergency.
“I am addressing you this morning as a compatriot who is deeply pained by the happenings in our dear country today. The last couple of years have tested our patience and resilience beyond measure and as it stands, I think we are at the breaking point.
“No part of this country is safe. The level of insecurity has reached an all time high and obviously, the president and commander in chief of the armed forces has no solution to the situation. Abuja, the seat of power is gradually been overrun by terrorists who now come in and operate with impunity completely unchallenged.
“These same terrorists have issued threats on the President himself and the recent attack on the Presidential guard brigade clearly shows that they are making good their threat. This is coming after the President’s advance team was ambushed and messed up only a few weeks ago.
“The attack on Kuje Correctional facility is still very fresh on our minds. While the federal government obviously can not rescue her citizens in the hands of bandits, these bandits confidently walk up to a correctional centre where their captured men are held and free them and other inmates just like that. That shows that the outlaws now rule.
” The economy is in a terrible shape as we speak. As at this morning, a Dollar is exchanging for over Seven Hundred Naira. That is over 300% worse than it was just Seven years ago. Unemployment is at an all time high. Most family can barely afford a meal daily.
“Today more than ever, the lines that divide us have taken prominence over the factors that unit us. There is general apprehension and a feeling of hopelessness. Indeed, the President has failed Nigeria and Nigerians tremendously.
“I therefore call on the President to quickly invoke section 305 sub- section (1) of the Nigeria constitution and go home.  We elected President Buhari to protect lives and property of this nation, we have seen that he has failed Nigerian, so the same Nigerians  are saying he should step aside. ”
He said Nigerians should not deceive themselves that all is well, adding that there is no way the country can conduct the 2023 general elections under the present deplorable security situation.
“As you can see, apart from ASSU strike, so many states are already closing their schools due to insecurity while market traders and farmers, including civil servants can no longer go out of their houses, so what else is remaining in Nigeria?” He questioned.
The SDP Chieftain regretted the huge resources being appropriated by the National Assembly on security without a corresponding results, recalling how billions if Naira was spent on purchase of supper Tucano Aircrafts from the US to fight insecurity but to no avail.
He therefore, advised the president to step aside for the country to move forward, reminding him of needles losts of lives.