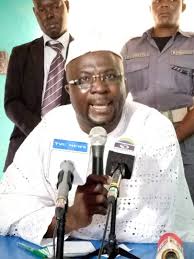 National President of Oodua Progressives Care Initiative (OPCI), Dr. Maruf Olarewaju, has declared President Muhammadu Buhari’s administration a complete failure owing to the security mess the country has been thrown into in recent time despite that Buhari is a retired General in the Nigerian Army in whom so much confidence had been reposed by the people.

OPCI President, who was fielding questions from journalists in Ilorin, the Kwara state capital, opined that the security situation in the country would not have degenerated to this abysmal level if the federal government had heeded several warnings from his organisation as well as other security stakeholders and well meaning Nigerians.

He said: “We have been calling on the federal government to be more proactive on the issue of security before it got to this level. I could recall that we organised a programme sometimes in Osogbo, Osun state and later in Kwara state on potential security challenges in Nigeria, where we sent a warning to the federal government that if care was not taken, so and so may happen. We, as an organisation, already foresaw what is happening in Nigeria today. It’s unfortunate that government did not pay attention to us, till it boomeranged this way and our President, who is a retired Army General could not secure his people.

“During former President Goodluck Jonathan’s era, we also had security challenges, but it was not as worse as what we are experiencing today. Before now, insecurity was peculiar to the North East alone, where Boko Haram was having a field day. But today there is banditry everywhere across the country. Sadly, nowhere is safe now in Nigeria.

“When you check the issue of bandits, you will recall that Nigerians have been calling on President Buhari to declare them as terrorists, but he refused because he believes they are Fulani like himself, so he believes they are family members and he can’t declare his family a terrorist group. That is where the federal government has got it wrong on bandits.

“It’s unfortunate that Nigeria’s security architecture has broken down and is comatose. Billions of Naira are budgeted annually for security, all to no avail. Based on the present security situation, we can easily declare the federal government led by President Muhammed Buhari a complete failure.”

Dr. Olarewaju, who averred that failure on security aspect by any government would automatically lead to failure in other aspects of governance, including the economy, said: “The solution is for President Muhammadu Buhari to see himself as President of Nigeria, and not President of Fulani. He must adhere strictly to the Oath he swore to by ensuring that he carries every stakeholder along in policy making decisions, including the traditional leaders in various communities across the country, who are grassroots leaders with adequate knowledge of their communities. They have a lot of role to play in nipping the seemingly intractable insecurity in the bud.”

Local security organisations, he said, are also critical stakeholders that have serious role to play when it comes to security issues, adding that OPCI effectively provided this service in Kwara state during the tenure of former Senate President Bukola Saraki as Governor, leading to the arrest of several hoodlums in the state, and there was peace. He said: “If we can do that in Kwara state then, why can’t the federal government make use of that strategy? The federal government must realise that police and other security agencies alone cannot do it.”

On incessant her demon/farmers conflicts, OPCI President said: “We may not see the end to the clashes between herdsmen and farmers in the live of this present administration because our President doesn’t see anything bad in the nefarious activities of the herdsmen.

“Imagine, many of our Governors, especially the Southern Governors, banned open grazing of cattle in their states as a way of curbing herdsmen/farmers clashes and the Minister of Justice and Attorney General of the Federation, Abubakar Malami, kicked against the decision of the governors, giving untenable excuses. This, to an average Nigerian, is that there is a hidden agenda for Fulani by this administration.

“All these are responsible for the secession agitations that we are seeing by IPOB and the Yoruba group. In a country where we are facing challenges, and the federal government that is supposed to be father for all failed to address issues holistically, secession agitations are bound to happen.

“Yes. We have been calling for restructuring since President Obasanjo’s era up to Dr. Goodluck Jonathan’s administration, assuming the federal government listened then and did the needful, we may not have found ourselves in this big mess. So, we can not just blame those calling for separation, it’s because of what they see as injustice.

“Imagine, where government is borrowing money to construct rail line to the Republic of Niger. what is our President’s special interest in Niger when we, the citizens of this country, are being subjected to abject poverty? An average unbiased Nigerian sees all these actions as hidden agenda by the Buhari led government. There is nothing bad in self determination, it depends on how you plan and go about it. If government failed to do the right thing, automatically people will choose what they believe can be solution to their problems.”