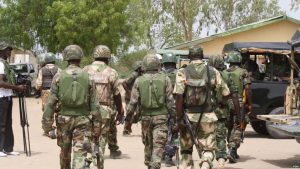 By: Ali Musa Biu-
In what looks like a test of their residual strength, members of the Islamic State West Africa Province, ISWAP, on Monday attacked a satellite campus of the Nigerian Army University located in Buratai, Borno state.
Eye witnesses told our correspondent who visited Buratai on Tuesday that, the insurgents seems to be targeting Military formations in the town, even as three people were caught in the cross-fire between the insurgents and soldiers who tried to repel the attack.
According to Mallam Ibrahim Ali, a resident if the town, the insurgents did not follow their normal route into the town as they gave been effective cordoned off by the Military, but sneaked into the town one after the other, before marching on to confront soldiers on duty at the Security and Strategic Studies mini campus if the university.
According to him, they marched on to the soldiers under the cover of darkness before opening fire, while other who were still in town also opened fire on unsuspecting civilians, killing three.
Staff of the University who fled the campus told our correspondent that they lost two of their men, stressing that the insurgents took way their own casualties before leaving the town, making it difficult to know how many if the attackers were killed or wounded
There is no official confirmation if the incident at the time of this report, but our correspondent gathered that, the soldiers on duty put up a very strong defence, but had to retreat, obviously having run out if ammunition.