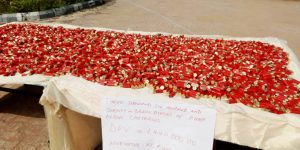 Kwara state Command of the Nigeria Customs Service has intercepted 3,620 rounds of ammunition packaged in 25 packs of 25 rounds each.

Briefing journalists on the activities of the Command in 2021 in Ilorin, the state capital, on Wednesday, Customs Area Command Controller, Comptroller Hussaini Bello Ahmed, said the ammunition, worth N1.4m, were contained in 14 cartons, adding that the landmark seizure was made around Bukuro axis of the Command based on intelligence report.

He said: “The Command intercepted a Peugeot 504 vehicle with registration number AP 448 AKD, containing a large quantity of pump action cartridges suspected to be smuggled into the country.

“The ammunition worth N1.4m were packaged in 25 packs of 25 rounds each, contained in 14 cartons, worth N1.4m. This landmark seizure was made around Bukuro axis of the Command. Based on intelligence report, the Command intercepted a Peugeot 504 vehicle with registration number AP 448 AKD. On searching the vehicle, it was found to contain a large quantity of pump action cartridges suspected to be smuggled into the country.

“This epic seizure is very commendable at the backdrop of the heightened insecurity in the country. Should 3,620 rounds of live ammunition of this magnitude escape into the Country and fall into wrong hands, the result will be appalling, devastating and disastrous.”

Reiterating that the Command’s intelligence network is still very potent, Bello warned perpetrators of heinous acts to desist, saying “any methods or techniques used will be uncovered. We will continue to confront the challenges that militate against our successes and build on the achievements made so far.”

Within the period under review, he added that the Command also recorded101 seizures as against 84 seizures in 2020, which included 2,971 Bags of foreign par boiled Rice, 420 Jeri cans of PMS, 39 fairly Used Vehicles, 20 Jeri cans of Vegetable Oil, 17 Motorcycles used as a means of conveyance of foreign parboiled Rice and PMS, and arrests of five suspects during the period under review and were released on administrative bail, adding that total Duty Paid Value (DPV) of the seizures was N99.9m.

The Area Commander further disclosed that the Command generated and remitted the sum of N9.8bn to the coffers of the Federal Government in 2021, surpassing that of 2020 by N2.9bn, adding that the achievements “are an indication that officers and men of the command are not lowering their guards in stemming the tide of nefarious activities perpetuated by smugglers.”

The Kwara Area Command under his command, he stressed, would continue to be at the forefront of anti smuggling activities, maximising revenue collection, while maintaining the highest standard and professionalism in performing their duties to the service and to the Nation at large.

He said the sterling feat was largely recorded due to the leadership style of the Comptroller General of Customs Col. Hameed Ibrahim Ali (Rtd) and his entire management team, adding that they would continue to justify the incentives and logistics support they received.

He urged the media and the general public to endeavor to always volunteer useful information on smuggling activities to the Command for the betterment of the Nation while asking traditional rulers, religious leaders, ward heads and community leaders to educate the youths against the dangers of smuggling, particularly the smuggling of Arms and Ammunition.
End