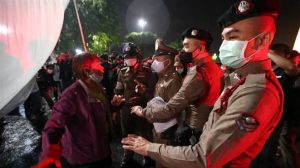 Measures introduced to stem the coronavirus pandemic pose a threat to human and political rights – also in democracies, warned over 500 signatories to an open letter published on Thursday.

“Even some democratically elected governments are fighting the pandemic by amassing emergency powers that restrict human rights and enhance state surveillance without regard to legal constraints, parliamentary oversight, or timeframes for the restoration of constitutional order,’’ the letter said.

“It is not a coincidence that the current pandemic began in a country where the free flow of information is stifled and where the government punished those warning about the dangers of the virus – warnings that were seen as spreading rumours harmful to the prestige of the state,’’ the letter added, referring to China.

“The COVID-19 crisis is an alarming wake-up call, an urgent warning that the freedoms we cherish are at risk and that we must not take them for granted,’’ the letter said.

About 70 pro-democracy institutions supported the letter.

It was initiated by the U.S.-based National Endowment for Democracy and the Stockholm-based International Institute for Democracy and Electoral Assistance (IDEA) that aids with training of election observers. (dpa/NAN)