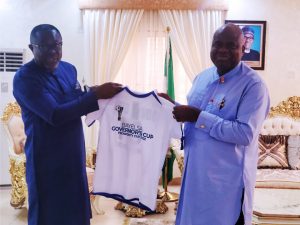 Organisers of Nigeria’s largest Grassroots Soccer Tournament, the Prosperity Cup, (Bayelsa Governor’s Cup) have extended the deadline for collection of forms for community football clubs to the 18th of April, 2022.

The extension was necessitated by overwhelming appeal by communities via several phone calls, as well as besieging the secretariat for an extension, to enable them put their teams together.

As at Friday, about one hundred and sixty (160) teams, have so far purchased registration forms to participate in this year’s edition of the Football Tournament.

The teams comprises of one hundred and fifteen (115) communities, thirty (30) churches, and thirteen (13) other institutions.

Official draws will take place tentatively at the end of April, with the Prosperity Governor His Excellency, Senator Douye Diri, Governor of Bayelsa State, as the Special Guest of Honor who is expected to present jerseys, balls and other Sports kits to participating communities.

Subsequently, the Deputy Governor, His Excellency Senator Lawrence Ewrudjakpor shall kick off the first match at the Samson Saisia Staduim.

Director General of the tournament, Mr. Ono K. Akpe who came out with this in a statement, on Friday, expressed his delight with the huge interest expressed by communities and organisations in the state. He stated that the number of teams registered so far for the tournament was a reflection of confidence and interest of youths and communities in the state on the tournament as well as an endorsement of Prosperity administration of Governor Douye Diri.

He assured Bayelsans that the organisers would ensure the tournament lives up to and even surpasses the standard it has been celebrated for.