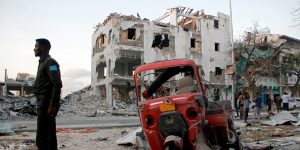 Since 2006, the United States has shown scant regard and refused responsibility for its secret air bombardments in Somalia in which many civilians have lost their lives and hundreds others maimed and made homeless.

Also capable in this atrocity is the grave and conspiratorial silence of THE international community and global media.which have failed to beam its searchlight on the atrocities of the US military in Somalia.

The Somalia air strikes according to the US government are part of a military campaign to increase security in Somalia by degrading al Shabaab and the Islamic State.

The terrorist group is said to have been active in Somalia since 2006, maintains influence in many areas of the country, and, according to AFRICOM, remains “resilient” despite several years of US intervention and billions of dollars spent.

Irrespective of the outcry of Amnesty International the United States has continued in its show of military might in poor Somalia in what might be described as a dedication to a scorched earth policy to completely ruin Somalia.

Where humanitarian assistance would have done the US has chosen to visit long suffering Somalia with its deadly assenal of bombs and missiles.

In the last decade and a half US bombs have rained on Somalia relentlessly killing more civilians than combatants and the world has kept silent.

Since the beginning of 2021 the
US Africa Command (AFRICOM) has conducted hundreds of air strikes in its fight against Al-Shabaab, but has only admitted to killing civilians in a handful of strikes.

However, the fact as reported by independent humanitarian groups working in Somalia indicates the contrary, civilians together with non combatants are being sent to their early graves by US strikes.

“The evidence is stacking up and it’s pretty damning. Not only does AFRICOM utterly fail at its mission to report civilian casualties in Somalia, but it doesn’t seem to care about the fate of the numerous families it has completely torn apart,” said Deprose Muchena, Amnesty International’s Director for East and Southern Africa, recently.

He noted that Amnesty International has documented several cases of the USA’s escalating air war on Somalia, where the AFRICOM thinks it can simply smear its civilian victims as ‘terrorists,’ no questions asked.

This to say the list is unconscionable and calls for global condemnation and recriminations, the situation calls for an independent enquiry by the United Nations.

A situation whereby a global military power can freely unleash terror on innocent civilians without accountability under the guise of fighting terrorists should have no place in the modern world. In any case the US should hold itself accountable in line with international laws and its own rules of military engagement.

Civilians should not be labeled terrorists and indiscriminately bombed. This cover up should not be allowed to continue, the global community must raise its voice against the atrocities been committed against a peaceful population by a foreign power.

In February this year Amnesty International said it found no evidence that some individuals killed and injured by US air strikes were members of Al-Shabaab or directly involved in hostilities.

To establish US culpability in the atrocities Amnesty International interviewed the victims’ relatives, community members and colleagues; analysed satellite images, photo and video evidence from the scene of the strikes; and identified the US munitions used.

“Nothing can excuse flouting the laws of war. Any US response to Al-Shabaab attacks must distinguish between fighters and civilians and take all feasible precautions to avoid harm to civilians,” said Abdullahi Hassan, Amnesty International’s Somalia Researcher.

It is imperative that the US which has made itself the global policeman of the be held to account.

The US military should not be allowed to continue to paint its civilian victims as ‘terrorists’ while leaving grieving families to their faith and the victim been made to suffer the twin tragedy of untimely death and defamation.

Somali remains one of the poorest nations in the world as a result frequent and prolong draughts which has turned its citizens to hungry destitutes.

Ironically while the country suffer under the weight of extreme poverty the US is expending billions of dollars to prosecute a war against a handful Al-Shabaab militants holed up in the country. Funds which could have turned the fortunes of the country around instead of the ungovernable hell hole US strikes have turned the country into.

The global community must rise up and do more to demand justice and accountability from the US in its constant bombardments which has killed so many Somalian civilians.