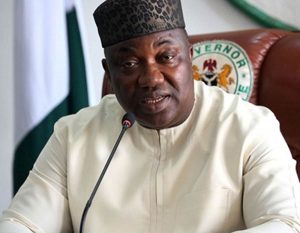 An Enugu based political group identified as Ezeagu Central Progressive ForumECPF, on Saturday, told Gov. Ugwuanyi off on his choice of candidate for the People’s Democratic Party for the House of Assembly seat ahead of the 2023 general elections.

The group in a statement, described the governor’s action as a blunder, while emphasising that it is quite too late for his new gimmicks of mending an already broken fence.

This development according to the group is to condemn the fact that Hon. ChimaObieze who had earlier served two term in the state house of Assembly, has been given another ticket by the Governor to run for third term against the zoning policy that binds the political process.
The group is accusing the governor of favouring people from Ezeagu North against it counterparts, while revealing that it has gotten an information that some shadow parties have gone ahead to rent people to pose as though the Southern and Central part of Ezeagu is okay with the governor’s decision.
“We have gotten information that in other to cover up, the former Chief of Staff who is from Ezeagu North alongside member representing Ezeagu constituency in Enugu state also from the Northern part of Ezeagu, has tried and still trying to reach out to prominent personalities from Ezeagu central in a bid to pacify, cajole them into accepting the situation on ground. Also they are by virtue of information at our disposal, trying to pay a courtesy visit to the Governor. We wish to by this press release, reiterate that we stand on zoning and cannot go back on it.” It said.

Decrying the action, the group further urged those involved to desist from staging such charade as they can never be swayed by such political gimmicks reinstating that only parties that has overtime respected the zoning policy will henceforth get their support and nothing else.
“We are also by the use of this medium, advisingall sons and daughters of EZEAGU CENTRAL to disassociate themselves from the purported meeting with Dr F.S.A UZOR and RT. HON CHIMA OBIEZE. On no occasion should any central son or daughter,follow Dr.Uzor and Obieze to any courtesy call/visit to the governor.A STICH IN TIME SAVES NINE” it added.
ECPF further opined that the action of the governor in disregarding the zoning policy and favouring only candidates from Ezeagu North, will soon constitute foreseeable and unforeseeable internal party crisis.

Some foreign devotees at the just concluded Osun-Osogbo festival have expressed belief in the sanctity of the Osun deity, saying the annual...
Read more
- Advertisement -