Some foreign devotees at the just concluded Osun-Osogbo festival have expressed belief in the sanctity of the...
Read more

A group, Kwara Awareness Movement (KAM), has cautioned Senator Sulaiman Ajadi against verbal attacks on the person of 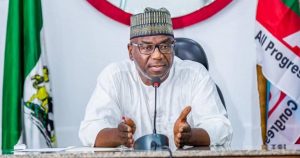 The group described as shocking Ajadi’s recent comments on the achievements of the AbdulRazaq administration in the last three years.

In a joint statement by its Chairman, Comrade Kamal Adigun and Secretary, Mr Joseph Afolayan, KAM urged Ajadi to desist from his campaign of calumny against the governor, seeking to mislead members of the public.

“Ajadi had in the last three years told many stakeholders in Kwara South that no governor had done a lot for the senatorial district in respect of infrastructural projects like AbdulRazaq.

“This comes with implications; the former federal lawmaker should realise that Kwarans are not gullible and it would be considered as insulting the intelligence of our people to think he could praise someone to high heaven yesterday and begin to castigate him today because of personal interests,” the group cautioned.

KAM also said it was disappointing that Ajadi, who had once represented Kwara South in the senate, could place personal interest above that of the senatorial district by choosing to attack Governor AbdulRazaq, who has made Kwara South his priority.

“Governor AbdulRazaq has done a lot for Kwara South people in his three years in office when it comes to infrastructural projects. If Ajadi had truly shown commitment to development and progress of Kwara South, he would have rather joined other well-meaning Kwarans to give necessary supports to Governor AbdulRazaq as he continues his mission to change the face of Kwara,” it added.

KAM added that the governor had done Ajadi no wrong by showing himself as a true democrat and allowing a level-playing field for all those who sought to get the Kwara South APC senatorial nomination.

The forum of Kogi former political office holders says Peter Obi, the Presidential Candidate of Labour Party is not a threat to the victory...
Read more
Economy