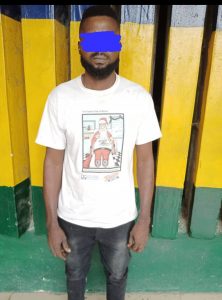 Police have arrested a 32-year-old man in Lagos for allegedly defiling his neighbour’s 13-year-old daughter.

Police spokesman in Lagos State, CSP Adekunle Ajisebutu, said in a statement issued on Sunday that detectives arrested the suspect after allegedly committing the offence at IdasoTown in Ibeju Lekki area on Sept. 20.

Ajisebutu added that the incident occurred after the suspect’s wife left for vigil at one of the churches in the neighbourhood.

“The victim’s mother had kept her in the custody of the suspect’s wife when she travelled out of town for three weeks.

“According to the victim’s mother who reported the case at the police station, when she returned from the journey, the victim reported to her that she was defiled by the suspect.

“During interrogation, the suspect confessed to the crime. He, however, pleaded for mercy,’’ CSP Ajisebutu added.

The police spokesman stated also that the victim had since been taken to the hospital for medical care.

He confirmed that the case had been transferred to the Gender Unit of the State Criminal Investigation Department, Panti, for investigation and prosecution on the directive of the Commissioner of Police, CP Hakeem Odumosu.

“The Commissioner of Police has promised to protect every girl child and other vulnerable persons in the state.

“He has also vowed to prosecute paedophiles with unbridled sexual urge for minors,’’ he stressed.

By Our Correspondent Member representing Makurdi/Guma in the House of Representatives, Hon. Benjamin Mzondu, has decried plots to resist the passage of ban on open...
Read more

A 30-year-old woman, Rhoda Danlami, on Thursday appeared in an Ikeja Magistrates’ Court in Lagos for allegedly stealing N5.8 million belonging to her employer. The...
Read more
- Advertisement -