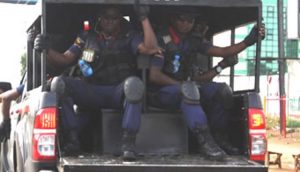 The Katsina State Command of the Nigeria Security and Civil Defence Corps (NSCDC), says it treated a total number of 1,161 cases in the year 2021.

The state Commandant, Muhammed Sanusi Bello, disclosed this on Friday, while presenting the scorecard of the command for the year 2021.

Bello disclosed that out of the 1,161 cases, 256 were criminal cases bordering on banditry, drug abuse or trafficking, rape, vandalization, unnatural offences, criminal trespassing, assaults, fraud, impersonation, among others.

Bello, who took charge of the command’s affair in June 2021, disclosed that high-profile cases handled by the command under his watch include a sting operation that led to the arrest of one Sunday Isaac and Hamisu Salisu within Katsina metropolis for being in possession of 173 parcels of suspected cannabis sativa (Marijuana). The suspects, he said, were subsequently handed over to the National Drug Law Enforcement Agency (NDLEA).

Others were the arrest of one Abdulrashid Mohammed, a suspected kidnapper and a couple of bandits as well as their informants.

According to the NSCDC state boss, while investigations have been concluded for some of the cases, others are still undergoing prosecution in various courts across the state.

Bello disclosed other interventions of the Katsina NSCDC in the year under review to include the command’s active response to over 80 disasters across the state where it “rendered first aid, rescue, transportation of the injured to various hospitals and evacuation of the dead victims. Majority of these incidents include road accidents; fire outbreaks, floods, building collapse, cholera outbreaks among others.

He said “the command’s disaster unit also made provision for security at the scenes of disaster against possible crimes perpetrated by bad elements who may see the incidents as an opportunity to breach law and order.”

The State Commandant, applauded the Katsina Government and people in the state for their continual support, promising that the command would work harder and devise more effective strategies in the fight against all forms of crimes and criminalities.